For a list of all Story Events, see: Story (Category Page)

The Story offers a glimpse into Titania's rich lore. There are a total of thirteen (13) Story Events that the Player can participate in using Tickets.

Each Story Event consist of five (5) Matches that the Player must win in order to advance the Story-line. Additionally, each Story Event has ten instances of Difficulty that offers replayability. The amount of Tickets required to participate in a Story Event is equivalent to its Difficulty. 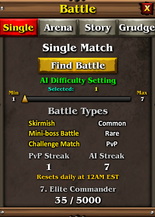 The Adventure Map can be accessed with the "Battle" button through the Battle Menu.

Each Story Event has 5 Battles.

Each Story Event has 10 Difficulty Instances

Completing a Difficulty Instance for the first time will award Players with guaranteed loot such as Trinket Capsules, Diamonds, Archaic Fragments, Refined Essence, and Keys.

I have not tested the values for Repeatable Loot. I tried my best to understand it from Pft's findings on the Story Expansion page, but I may have interpreted it wrong. I will slowly update this page through trial and error from my own game-play. If you have any insights or findings, I'll greatly appreciate it if you share! :)

Retrieved from "https://riseofchampions.fandom.com/wiki/Story?oldid=7951"
Community content is available under CC-BY-SA unless otherwise noted.